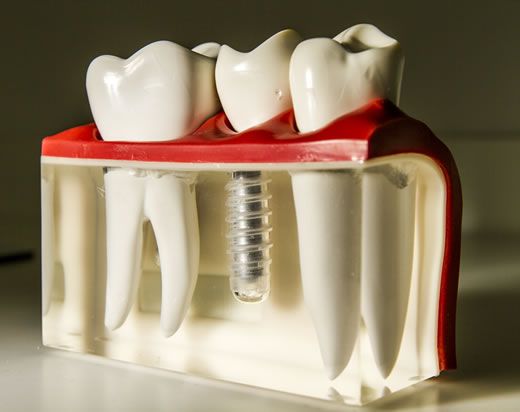 Implants are placed in the jaw bone to replace missing tooth roots. These serve as an anchor for crowns, bridges and dentures. The advantage of this type of prosthesis is that it can be designed independently of adjacent teeth which are thus protected. If the bone in the height or the width may not be sufficient to anchor an implant stable, so there is the possibility of bone formation. Both foreign materials, as well as your own bone may be used. We perform implant restorations in close cooperation with your family dentist through, which then draws the dentures after the surgical treatment phase. If you are interested in implants, please talk to your family dentist, or make an appointment at our practice. If you wish, we also like to coordinate the treatment for you.

Since the recognition of dental implantology by the parent company of all dental societies in Germany, the DGZMK 1992 dental implantology has developed into a reliable and diverse part of dentistry. We now know that at the appropriate indication, proper treatment and appropriate follow-up of implant-supported dentures accompanies its owner for decades. In addition, in the mouth, orthodontic, maxillofacial area, the use of anchoring the so-called prostheses, which is the artificial replacement of a previous by a genetic defect, accident, or lost due to a tumor exposed parts of the face such as eyes, a nose or an ear is relevant.

The focus is not only how common a few years ago, the restoration of masticatory function but to achieve an aesthetically perfect and lasting results, that is a denture which the patient viewer and as such is not recognized. This also means that should the planning and implementation of this therapy done carefully and disciplines to find the best way for the individual case.

Implants often allow the introduction of a fixed prosthesis when there is insufficient or no possibilities of stabilization in the remaining residual dentition. Bridge structures can involve simultaneously teeth and implants, thus the range of prosthetic solutions is increased significantly. Today preferably helical implants with different surface treatments are used. After a 3-6 month healing - in favorable situations bones also significantly shorter or even directly after implantation - Kronen-/Brückenkonstruktionen but with these implants can also be loaded with telescopes or mounting flanges for a removable denture.

For the introduction of such implants usually only a small outpatient procedure under local anesthesia is necessary, which is comparable to the load of a tooth extraction. When adequate bone anchoring without preparatory measures is possible.

Unfortunately, it often comes to clinical situations which make it impossible for the implants to the ideally planned to anchor positions. This is due to atrophy of the so-called hard and soft tissue, so the decline in these tissues (eg due to prolonged absence of teeth). Biologically speaking, the tooth-bearing portion of the alveolar ridge for tooth loss is returned, because the force is applied is lost to the bone through the root and no chewing forces on the teeth to the jawbone be transferred. The bone begins to shrink in all dimensions, that is, the height and width of the alveolar ridge is reduced to the extent that a conventional prosthetic treatment is difficult to impossible. If in such extreme situations, there is no anatomical suffiency treatment of weakened bone must come from an increased risk of fracture of the mandible.

A build up of hard and / or soft tissue for implantation to be made - in all patients prior to the implantation of a structure of the tissue is considered necessary in the must in such cases or preparing the same - depending on the extent of bone resorption. With limited amount of bone needed this can caseation from the area (for example, from the mandible: chin, jaw angle) are obtained. If more volume is needed, for example, can also be a removal of pelvic bones to be the tool of choice. Again, it is important that the treatment algorithm, ie, the sequence of treatment steps has been discussed before treatment with all stakeholders. On average, may be the placement of the implants and then after 100 more days of the functional loading of the implants after a latency period of about 100 days after the initial procedure (bone formation). This prevents the parts of the brain area built up, it is similar to the alveolar ridge after tooth loss, lost again. So you nutz the implants inserted in order to achieve an approximately equal load distribution in the transplanted bone like natural teeth. Thus, a re-constructed brain area of ​​bone loss is largely avoided. The consulting, organization and management of implant and implant interested patients is performed in our practice in implant clinic specially installed interdisciplinary, involving all disciplines involved in the treatment. After a clinical examination usually takes place roughly exploratory X-ray examination, which is sufficient in general for some advice on the dental implant options in an individual case. This also of course already created documents (eg X-rays) can be brought.