Trauma to the teeth 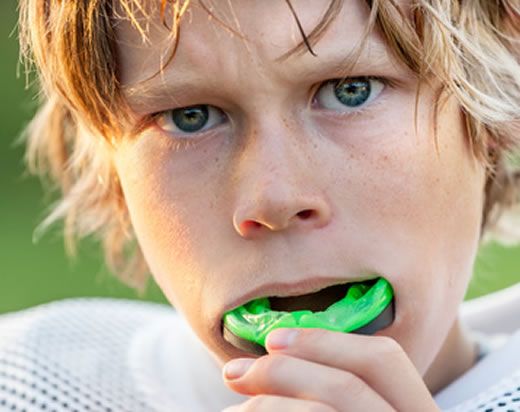 Injuries of the teeth and gums can occur in all age groups, but predominantly in children and adolescents. More than 50 percent of adolescents suffer before their 17th birthday of a dental trauma. Boys are affected three times as often as girls. Between the second and the third year and also between the seventh and eleventh year many accidents happen especially where teeth are injured. The causes are, depending on the age group, commonly found in schools, at leisure and in family life. Specific risk is involved in so-called contact sports such as football, basketball, handball, wrestling, boxing, karate. In addition, there are sports such as inline skating with an increased fall risk. Experience has shown that many dental accidents happen when riding a bicycle, playing ball and in swimming pool.

A crucial factor for the success is time. Injured teeth should be treated promptly.
Due to the exposed position of the teeth, the upper front teeth in the primary dentition, as well as in the permanent dentition are affected most frequently in dental injuries. In most cases, it is possible to save the damaged teeth. This depends on the specific dental history, the type of injury, the periodontal situation and the status of root growth. Milk teeth are not replanted since this would include the risk of damaging the permanent tooth germ.
Lesions appear either in the crown area of ​​the tooth or additionally affect the tooth root. Likewise, the tooth can be moved out from his tooth socket by the acting forces. Injured teeth should be kept as soon as possible in a "dental safe box" and dental care should begin soon after the accident, so that the probability of success of tooth preservation is high.

Teeth which suffered a trauma could show as late claims the death of the tooth nerve, so that weeks, months or years after the trauma, dental root canal treatment is required.
Protecting themselves against dental trauma is difficult.

At-risk sports a targeted protection can be achieved against dental injuries by an individually adapted mouthguard.
Further information can be gained under www.dentaltraumaguide.org

With the usage of our services you permit us to use cookies.
More information